Rajaji National Park was created in 1985 by combining three sanctuaries: Chilla, Motichur and Rajaji. Now in 20th April 2015 it become the status of India’s 48th and Uttarakhand 2nd Tiger Reserve. Now known as Rajaji Tiger Reserve. The new 1075 sq. kms. area of both moist and dry forests covers the crumbly and precipitous Shivalik Hills along the southern and eastern edges of the Doon Valley, on both banks of the holy Ganga river and close to the temple towns of Rishikesh and Haridwar. Rajaji NP has a healthy population of Asian Elephants and also supports Tigers, Leopards, Hyena, Sambar, Cheetal, Barking Deer, Nilgai and other fauna. 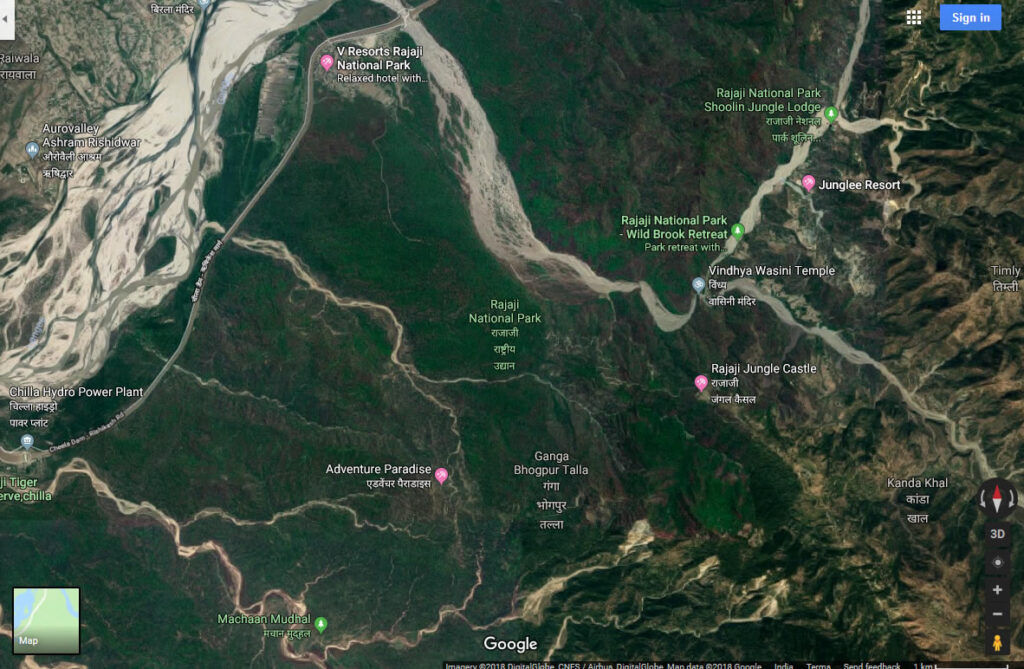 The Park is divided into two blocks separated by the Ganga. The western block is connected to forests in Himachal Pradesh and Haryana, and the eastern part continues into Lansdowne Forest Division and further to Corbett Tiger Reserve. A system of barrages and hydel channels has been constructed for electricity and irrigation. These have created two reservoirs in Bheemghoda and at Kunnao, near Haridwar and Rishikesh, respectively. Kunnao gives rise to a canal, parallel to the Ganga, which goes through a power house before returning to the Ganga.

There are four tourism zones in the Park, Chilla, Motichur, Jhilmil and Ranipur. It’s Motichur Tourism Zone is accessed by a gate situated on Haridwar Road, about 35kms from Dehradun, just before the railway crossing there. Chilla is the larger of the availability of jeeps, guides and lodging. Chilla is 45 kms east of Dehradun, near Haridwar. While Ranipur is at the end of Haridwar after BHEL, and Jhilmil Jheel on Najibabad road just 18 km from Chandi Devi Temple. At its simplest, Chilla is reached via the roundabout at the Chandi Ghat Chowk, from where one crosses the Ganga by the long bridge and at the end, a left turn will be onto the road directly to Chilla Gate. The hydel barrage at Chilla has resulted in a large housing colony of engineers and workers, as well as a few basic dhabas and grocery shops. 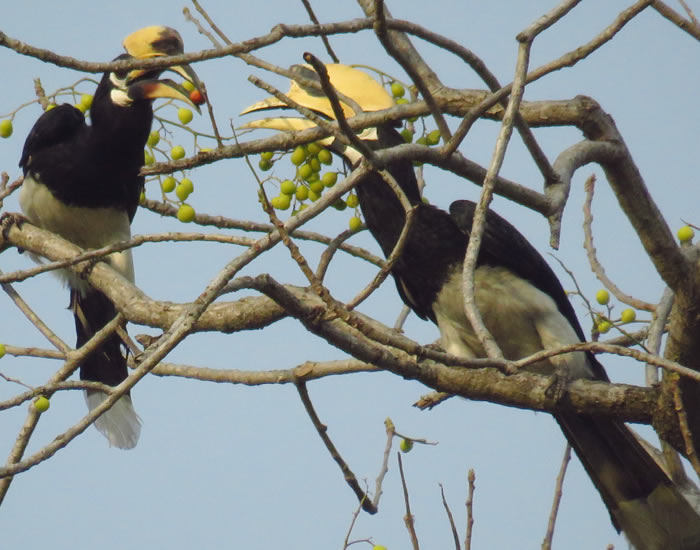 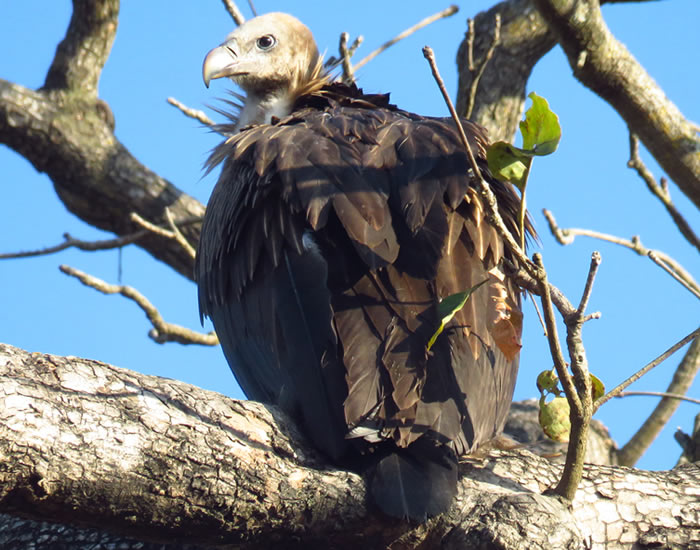 Entry to the tourism zones requires a ticket and vehicle entry fee, payable at the ticket counters at either Chilla or Motichur gates. Jeeps are available for hire at Chilla gate. As this is prime elephant country, it is advisable to take a guide or hire a jeep, as the drivers are experienced at handling elephant encounters.

Rajaji NP, straddling the transition zone between the Himalayas and Gangetic plains, offers truly rich birding. The habitats include Sal forests interspersed with areas of Zizyphus scrub, mixed forest and riverine grasslands. All contribute to the bird diversity. Wide, boulders, seasonal streams, known locally as sots or raos drain the area. The tourism zones are open from 15th November until 15th June. Winter is the best time of visit, as many migratory species from the High Himalaya are present. Significantly, Rajaji is the northern limit for Great Hornbills and Oriental Pied Hornbills. Great Hornbills are usually in pairs in the taller trees, while Oriental Pied Hornbills tend to congregate in gregarious, noisy flocks, usually on ‘Bakhli’ (Annogeisus latifolia) trees. Due to the proximity of both tourism zones to Haridwar and Rishikesh, things can get crowded in the evenings and on weekends. Early morning visits are wise; birds are most active and people are not! 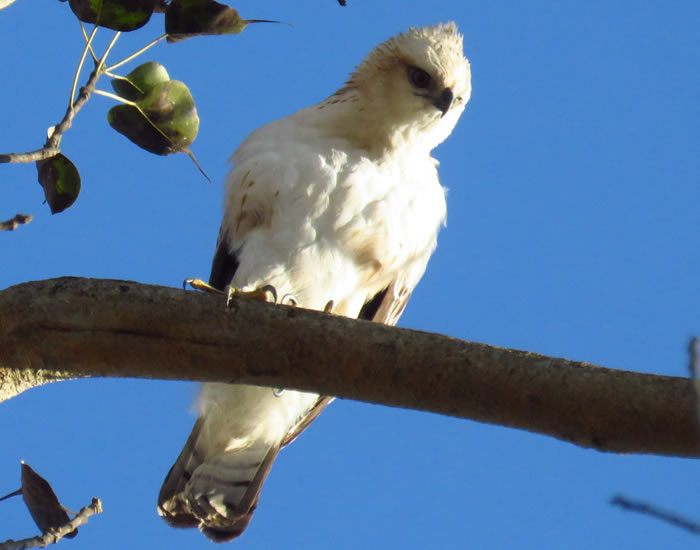 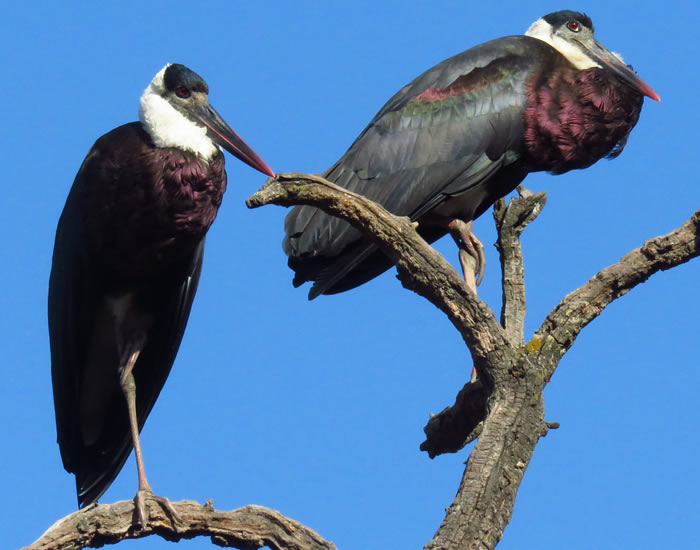 Mundal Sot is a broad streambed bordered by dry grasslands and scrubby Ber (Zizyphus mauritiana) trees. Sirkeer Malkoha may lurk. The tall Saccharum and Vetiveria grasses are good for Indian Silverbill, Pied Bushchat, Common Stonechat and Scaly-breasted Munia. Green-and Chestnut-headed Bee-eater are also seen. In the rocky streambeds and on the cliffs one can scan for Wallcreeper, a winter visitor. Some of the taller trees will yield Crested Serpent Eagle. In the winter, a tiger or leopard kill will attract Himalayan-and Eurasian Griffon, as well as both Cinereous-and Red-headed Vulture.

Mundal Chowki, and its watchtower are 8 kms down the road. This chowki a good spot for overflying Oriental Pied and Great Hornbill. The ‘Paapri’ (Holoptelia integrifolia or Kanju) trees behind the chowki may have more hornbills. Blue-bearded Bee-eater and Eurasian Wryneck have been seen in the Eucalyptus trees outside the chowki. In the winter, the distinctive calls of the Black Francolin are heard in the nearby grasslands; with luck, one may spot these elusive birds. The mixed forest behind the watchtower abounds in Himalayan Bulbuls, especially if the Curry-Leaf (Murraya koenigii) is fruiting. The shrubbery may yield the jewel-like Rufous-bellied Niltava.

From Mundal, the path winds through the grasslands towards Aamgaddi Rao. The road may have dust-bathing Yellow-legged Buttonqail, Barred Buttonquail and Grey Francolin. The dead Shisham snags here are favoured perches for Black-shouldered Kite, Red-headed Vulture and Egytian Vulture. A little further on, there is a grove of Pilkhan (Ficus racemosa) which a Changeable Hawk Eagle pair has used for several years. These trees also attract Brown-headed Barbet, Lineated Barbet, Coppersmith Barbet, Yellow-footed Green Pigeon, Oriental-Pied Hornbill, Grey Hornbill and Great Hornbill.

After crossing the wide Aamgaddi Rao, the road climbs the spine of the Shivaliks, where the Himalayan foothills and the Shivaliks blend. The vegetation has a Himalayan flavor with Cheer Pine (Pinus roxburghii) seen on the hill tops and Camel’s Foot Climber (Bauhinia vahlii) with their distinctive leaves, forming Tarzanesque vines between the trees. Early morning may reveal Kaleej Pheasant. The winding road is steep in parts. At Hill Top, the fruiting Maida-lakri Trees (Litsea monopetala) in the spring attract Great Hornbills. These trees give a good chance to see these majestic birds up close. But, they are very shy and one must approach stealthily, not always easy in a jeep. These trees also have Wedge-tailed Green Pigeon.

In the late winter, the Coral Trees (Erythrina blakeii) trees will be in bloom with their fabulous scarlet, blossoms and these attract Spangled Drongos, Bronzed Drongos, Crimson Sunbird and Purple Sunbird. Flocks of Slaty-headed Parakeets are seen in the winter. Other birds to look out for are Verditer Flycatcher, Rufous-bellied Niltava, Rufous-gorgeted Flycatcher, Puff-throated Babbler, Black-chinned Babbler, White-crested Laughingthrush and (if one is very lucky) Green Magpie and Blue-throated Barbet. Descending from Hill Top, the road fords the Meethawali Sot stream and passes the FRH of the same name, not yet open to tourists). The large Crested Kingfisher may be around, as well as the White-capped Water Redstart. The tail Paapri (Holoptelia integrifolia) and Silk Cotton (Bombax ceiba or Semal) trees here are promising for spotting Golden Oriole, Golden-fronted Leafbird and Orange-bellied Leafbird. The tree trunks may have Bar-tailed Treecreeper and Chestnut-bellied Nuthatch. 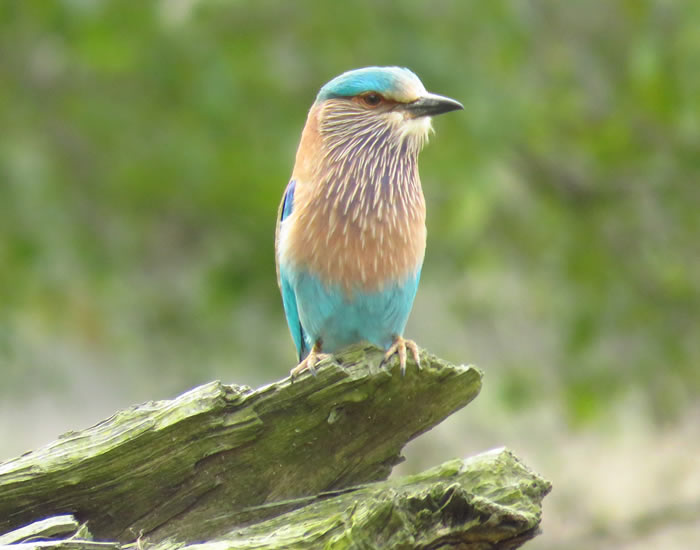 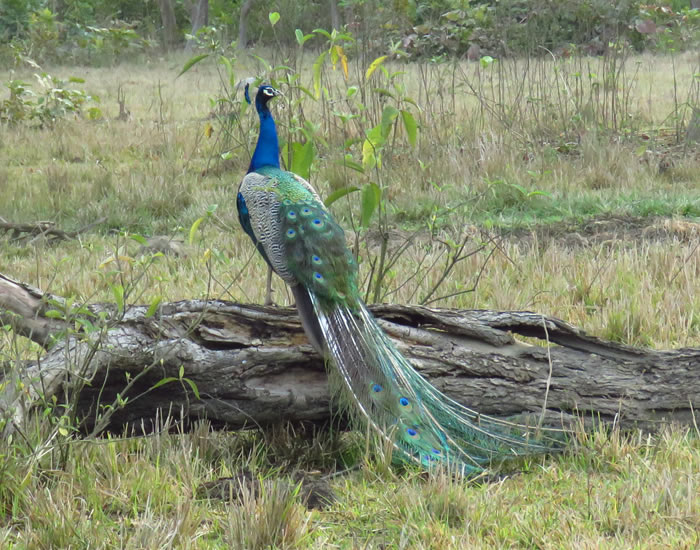 The road next passes through a dense, almost impenetrable grove of short Kathsagwan (Haplophragma adenophyllum) before emerging onto the dry, lower, wider Meethawali Sot stream. Visitors cannot take a left at the junction at the end of the Haplophragma patch; one must take a right. The road parallels Khara Rao and passes the forest chowki of that name, built on a low escarpment. This area is on the border of the Park (the rao is the boundary between Rajaji Np and Haridwar Forest Division to the south). Until the 1980s, a village existed here. When the park was formed the village was moved outside the park limits. The centuries-old village well is still seen 150 m. south of and below the forest chowki, within the rao.

A little ahead of the chowki, the rao meanders and forms small stagnant pools that often trap small fish and frogs, which attract small flocks of Black Stork. These birds are shy and one will need to approach them slowly and keep one’s distance. But once comfortable with the birder’s presence, one can park and watch them at length. From here, the path crosses several dry raos and enters another hilly patch, this one having the characteristic Shivalik combination of clayey soil, Sal (Shorea robusta) forest and steep, unstable, grassy or pebbly slopes. The road here is narrow and after a rain, can be slippery. The forest here is almost exclusively Sal, interspersed with Sain (Terminalia tomentosa).

Rajaji NP has a wide diversity of woodpeckers. This zone of primary Sal forest is better than any other for them. Among the larger species are the rare Great Slaty Woodpecker (the largest in the Indian Subcontinent), Greater Flameback, Black-rumped Flameback, Himalayan Flameback, Fulvous-breasted Woodpecker, Greater Yellownape, Scaly-bellied Woodpecker and Grey-headed Woodpecker.

Smaller woodpeckers here include Rufous-bellied Woodpecker, Grey-capped Pygmy Woodpecker, Brown-capped Pygmy Woodpecker and the diminutive Speckled Piculet. The Road next follows the wide Ghasiram Sot and continues to skirt the southern boundary of the Park. With the wide streambed to the left and Sal forest to the right, this forms an interesting contrast. Ghasiram Sot is another good place to spot Black Storks, as well as River Lapwings. Common Kestrels may sometimes be seen hovering over the grasslands here. Further down the road, the sot widens and forms a large flat area bordered to right by a low clay embankment eroded by water. The many holes in this embankment are used by nesting Blue-tailed Bee-eaters in the summer.

The road enters Sal forest again – back into the ‘woodpecker zone’. A bit further on, the forest changes incongruously to Teak forest (not native to this region). A road branches at left to the Ghasiram Watchtower. This Teak (Tectona grandis) forest was planted in the 1800s when the area was used for commercial logging. The waterhole at left of and below the moated watchtower was originally built to attract animals for the benefit of British-era shikaris waiting atop the tower.

Time spent on the tower is fruitful since it is almost at the same level as the canopy. Near close-up views of flocks of Scarlet Minivet and Long-tailed Minivet are possible. Several kingfisher species may be sitting patiently on branches overhanging the waterhole. One may also scan the tops of the trees on the opposite (south) side of the rao for Black Stork, if one has yet to see them. This tower is an excellent place for keen bird photographers to spend time.

Returning to the main circuit road and continuing back the gate, one may exit and stop by for that much-needed cup of chai. The tea shop also can whip up a limited if welcome breakfast on a cold and crisp winter morning.

First you reach to Haridwar, as most of tourism area is around Haridwar City and it is well connected with road and train.