The Maldevta area is more hilly and rocky. The slopes have lower montane forest. The upper reaches of the Song river and its tributaries rush through here. To get to Maldevta, one has to turn left at the junction at the end of Raipur Road. The road is initially straight and bordered by riverine scrub similar to that encountered on the Thano road. The right side is degraded and in places only Lantana scrub remains. This side is an Army field-firing range and red-flags posted at intervals along the road will indicate when it is in use. This region is a bit poor in birdlife, although on occasion one may spot the odd Egyptian Vulture or Oriental Honey Buzzard soaring over the bare seasonal riverbed. 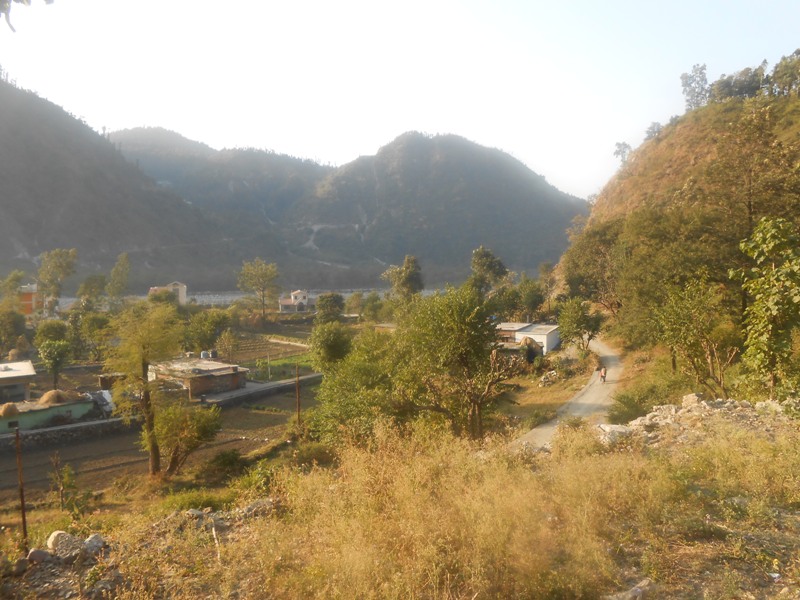 The right side of the road is lined by a narrow canal known as the Kalanga Canal, where one might see the odd Little Cormorant sitting on the parapet. Beyond this is a forested hillside which on the 30th November 1814, was the scene of the Battle of Nalapani where the poorly defended Kalanga Fort was captured and razed to the ground during the Anglo-Gorkha War (1814-1816). This war, fought between the armies of the British East India Company and the Kingdom of Nepal, resulted in the 1816 Treaty of Sugauli, by which the regions of Sirmaur (now in Himachal Pradesh), Garhwal and Kumaon (and Sikkim in the east), were ceded to the British.

The British built two monuments at the scene of this battle, one in memory of Maj.-Gen. Rollo Gillespie, killed here by a Gorkha sharpshooter. The other was to his worthy opponent Gen. Bal Bahadur Thapa, commander of the defeated Gorkha army. While the ruins of the fort are long gone, the monuments remain. They are maintained by whichever battalion of the Gorkha Regiment of the Indian Army is posted in the valley. Today, the only battles fought on this hillside are by the indigenous vegetation against the insidious Lantana. 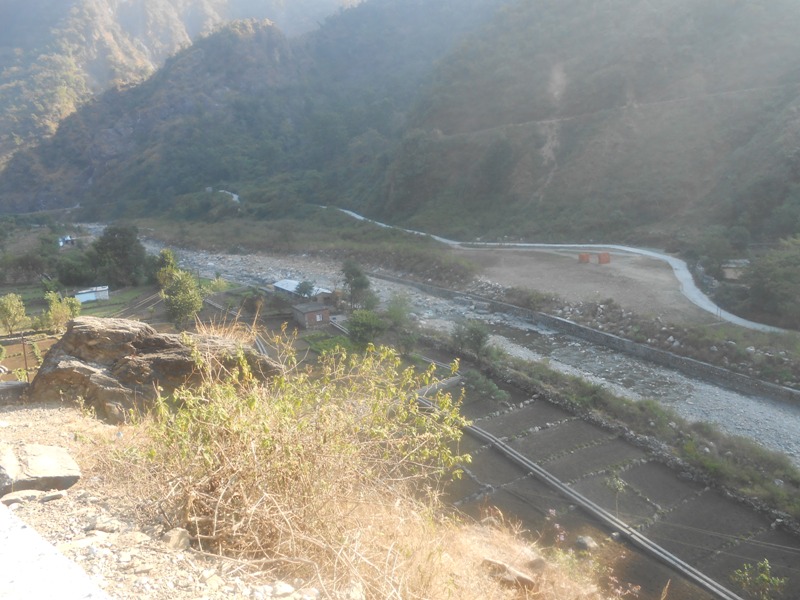 Further up is the small village of Maldevta. The eponymous temple is shaded by mango trees. This the last place to buy basic food items and get decent chai, before the road rises into the hills. The initial climb is mostly bare, since this was once a limestone quarry. But a short distance on is Kumalda village, where there are a few orchards of mango and guava, attracting Plum-headed Parakeet and (in winter) Slaty-headed Parakeet.

Beyond, there is an iron bridge across the Bandal stream (which meets the Song downstream). From here, if one travels straight, one may follow this stream for about 2 kms. The impressively oversized Crested Kingfisher or the small Common Kingfisher may be seen. Also, seen are Plumbeous Redstart, White-capped Water Redstart (said to have been Indira Gandhi’s favourite bird) and in winter, Spotted Forktail and Brown Dipper. Crested Buntings are seen in the summer.

Crossing the iron bridge, the road climbs steeply into the hills, following the course of the Song River which flows through far below. Here the vegetation is scrubby Lantana with stunted Sapium insigne and Jatropha spp. The latter are probably escapees from a plantation of these bio-diesel-producing plants. There are also smaller stands of Hill Bamboo and ‘Kambel’ (Lannea coromandelica), Sal (Shorea robusta) and the occasional Peepul (Ficus religiosa) and Banyan (F. benghalensis) tree. Interestingly, there are also species of Agave, which when they are in bloom in June-July, attract Crimson Sunbird, Himalayan Bulbul and Orange-bellied Leafbird.

One may either drive along the paved road, stopping where it looks promising (and there are many such places) and watching birds at leisure, or park by the side of the road and walk on for a bi. Interesting birds in this area are Red-billed Blue Magpie, Grey Treepie, Crimson Sunbird, Green-tailed Sunbird, Mrs. Gould’s Sunbird, Grey-capped Pygmy Woodpecker, Fulvous-breasted Woodpecker, Greater Yellownape, White-crested Laughingthrush, Eurasian Cuckoo, Pied Bushchat, Asian Paradise Flycatcher (summer), Verditer Flycatcher, Black-lored Tit and Fire-breasted Flowerpecker, Grey-bellied Prinia, Greenish Warbler and Lemon-rumped Warbler. Grey-sided Bush Warbler, Common Chiffchaff, Blue-fronted Redstart and Siberian Rubythroat may also be rarely seen. 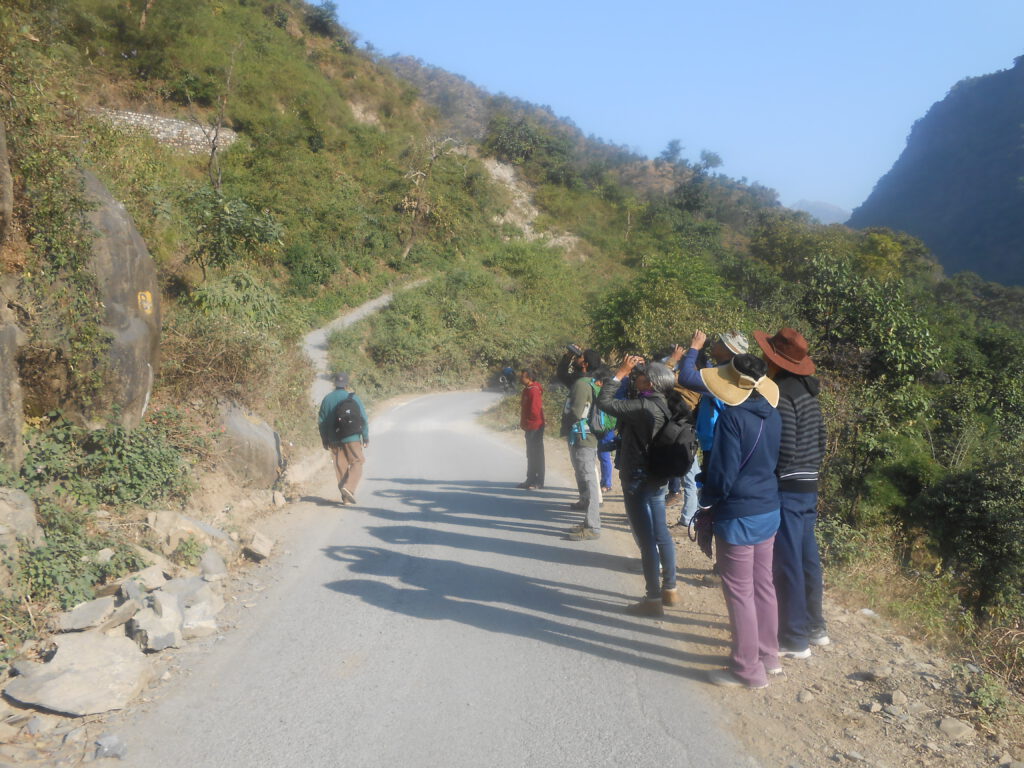 About 3kms from the iron bridge, the road bends and crosses a small bridge across a small perennial stream. A few metres beyond the bridge, to the left, a narrow jeepable track meanders up the hill through beautiful montane forest to a village perched just below the crest of the ridge. This path is little distributed as it is too steep and rough for average traffic. For the adventurous, this path is well worth a walk up. The effort will be rewarded by Blue-throated Flycatcher, Asian Paradise Flycatcher (summer), Rufous-gorgeted Flycatcher, Rufous-bellied Niltava, Yellow-footed Green Pigeon, Wedge-tailed Green Pigeon, Bar-winged Flycatcher Shrike, Kaleej Pheasant, Green Magpie (winter), Black Bulbul, Spotted Forktail. Yellow-bellied Fantail and Asian Barred Owlet. There is also the possibility of coming across Leopard, Barking Deer and Jackal.

One may continue down this road as it climbs into the hills. It eventually joins the Dhanaulti-Chamba road below Surkanda Devi. As one climbs further, in the summer the calls of Great Barbet will get louder. There is a good chance of spotting one above Dabra village. Also, Black Francolin may be seen on the edges of the terraced fields as well as Hill Partridge. The drive through this area is scenic and certainly worth a day-trip.